… or have an ectopic pregnancy rupture at the top of a mountain (45 minutes from the closest hospital with no cell service) or your car could slide of your driveway in an ice storm, roll 4 times & land upside down with no seatbelt on & you “walk away” with only a broken leg & your friend a tweaked shoulder (thank goodness she had her seatbelt on). And you could die or you might not! 😊Both of those things happened to me, my friend said she was going to call me “kitty” because she said I’m like a cat with 9 lives, if that’s true I have 6 left. 😽

me home from the hospital even the kitty missed me … if you live in Boulder note the BCH water jug ;)) 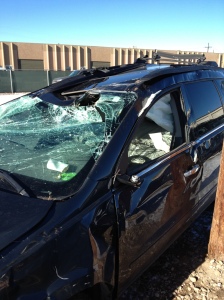 after rolling 4 times, no seatbelt, that car saved my life — unbeknownst to me the Chevy Traverse is one of the few SUV’s that have a steel roll bar — paramedics said almost no-one survives an accident like that without their seatbelt on, don’t leave your driveway or garage without your seatbelt!!!

“seize the day, seize the moment”

“say yes more often than no”

“Don’t put off tomorrow what you can do today”

“don’t save things for a special occasion”  I had jewelry from my mother & grandmother sitting in my safe deposit box for 20 years waiting for my 50th birthday (a special occasion) but then I thought what if I don’t make it to 50??? So I took it out and made a ring for no special reason, because “what was I waiting for?”  You save expensive perfume or wine for special occasions and then before you know it it’s gone bad! Don’t wait, every day is special (some more than others — but still)!

When I would read stories or hear people say that they were grateful for their near death experience or from surviving a terrible illness or accident or incident because it “changed their life” I used to sort of think “whatever” 🙄 , but it really does change your life, it did for me, for the better!

I never put off travel (sometimes much to the dismay of my husband’s wallet). I never would go out on “school nights” because well “it’s a school night” and that puritan work ethic that my dad instilled me was always in the back of my mind.  “Early to bed, early to rise … the early bird gets the worm” & all that! But after my experiences something in me shifted and I realized life really is too short! So now I say yes more often than no … again much to the dismay of my husband 😜 but in general he agrees & gets it! Thank goodness!

At first I was angry for all the things that led up to the ectopic pregnancy, medical device failure, doctors not listening to me (you know your own body & you have to be your own advocate & question their expertise — doctors are only human & they make mistakes, get second opinions, don’t be the guinea pig for new drugs or devices like I was). If you’ve given birth to two kids after 36 hours of labor with each one (total of 72 hours!!!) Lived through 5 months of morning sickness (or all day sickness) with both pregnancies all while working.  And you’re finished having children, but your husband won’t get a vasectomy … do what I should have done and tell him if he won’t get a vasectomy then you WON’T be having “you know what” with him until he does! It’s the least he can do after all you’ve been through!  Sorry honey, but it true! 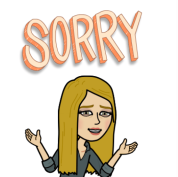 But when I was in the hospital, on the 2nd to the last day, after major surgery to save my life & a blood transfusion that also saved my life. (🙏 to blood donors, if you can you should)! I had two things said to me that completely altered how I would view my experience, a nurse came in and said happy birthday! (I had turned 40 on my third day in the hospital) and I replied “I’ve had better birthdays” and she said “no you have not because you lived to see this one” I was speechless and then tears rolled down my face because she was right. I was LUCKY to have made it to my 40th birthday!  And then my sister-in-law said instead of being angry at all the mistakes that were made leading up to you ending up on the ER, think about everything that went right that day & the fact that “the stars were definitely aligned to get you to the hospital in time”. My husband is an excellent driver he got me from the ski mountain to the hospital in 20 min (it’s a 45 min mountain drive at best), there wasn’t a snow storm that day, or an accident in the canyon, the registrar at the hospital didn’t even take my name but sent me straight back to be attended to, the ultrasound technician started my ultrasound, excused herself to tell them there wasn’t enough time to finish the scan, they found a obgyn surgeon who happened to be across the street (shopping on her day off) and she came over to do the surgery, the ER doctor was honest enough to say “I can save your life but I’d prefer a obgyn do the surgery”.  I was about to have my stomach pumped to go into surgery but threw up from all the morphine before the stomach pump guy arrived 😜 saving precious time. Celia you were right the “stars were aligned” that day, it was not my time! They said 5 min longer and I probably would have died (I had lost so much blood), and two or three days later when my body wasn’t replacing its own blood quickly enough, I had no choice but to have a transfusion that also saved my life. A couple of months after I got out of the hospital I went out with a few girlfriends and my friend said, when I tell people what happened to you I don’t know what to call it, because it wasn’t an accident (like the rolling car), it wasn’t an illness, it wasn’t a miscarriage, should I refer to as “the incident?” And we all agreed at the table that’s how we’d refer to it as “the incident”  but in retrospect I think we should have named it a gift ☺️. I have a huge scar that reminds me every day that I’m one of the lucky ones and I refuse to take any day for granted!

2 thoughts on “You could get hit by a bus tomorrow ….”