Perhaps one of the best (or worst 😜) “side effects/symptoms” of perimenopause is my lack of tolerance for bullshit (my husband would say not “the best”).  At first I was horrified by my thoughts and sometimes actions … at one of my husband’s company parties we had made a promise, one might say a “vow”, (I wish it had been a contract and was signed AND notarized 😝) to leave no later than 9p, the party was an hour away and we both had to get up at 4a for various kid activities.  Looking back on it this was probably one of the first indications I was entering perimenopause.  Dinner was supposed to be served at 6p, by 8p no dinner, at 8:30ish I began indicating we’d had plenty of appetizers and I was no longer hungry and we should head home.  Over the next hour or so my husband kept saying “give it 5 more minutes”, 9:30p still no dinner.  After 3 hours of sitting across from his 25 year old assistant, not married, no kids & who by the way looks like a prettier version of Emma Stone, giving ME life advice (I was 44ish at the time, married 15 years, 2 children/36 hour labors each, a ruptured ectopic pregnancy that nearly killed me, and a terminally ill father), yet I had to sit there and politely nod and pretend to listen to her advice & life wisdom 🙄.  I was getting more & more angry by the minute, finally I said “I’m going to the bathroom, if dinner’s not here when I get back we’re leaving” and he said “what’s your problem?!” I’d passed my boiling point & hit the table with my fist and way too loudly said “the problem is … I DON’T WANT TO BE HERE!”.  Needless to say it made for a very uncomfortable drive home & I seriously thought he might ask for a divorce 😯!

That was just the beginning, recently I stole $1.00 worth of screws from a local store, when I tried to check out (after trying to purchase these screws three days in a row and experiencing all sorts of incompetence & rudeness), the cashier said the screws were ringing up for $2.23 instead of .23 cents, I said “that’s fine, I’ll pay whatever, I CANNOT be in this store any longer, this is my third day in a row trying to purchase these screws”, the 25 year old cashier started to call his manager over and I put up my hand and said “no please don’t, just please let me check out, I’m willing to pay 10 times what their worth!” The manager said “No you’ll have to go back to that aisle and have them write it up again” … as I’m walking back to that aisle about to call “bullshit” on their whole system and store and on the verge of a complete meltdown, I crumbled up the little brown bag of screws, shoved them in my purse, checked out, paid for my other items and marched right out (probably never to return again)!  My husband was horrified and said I could have gotten arrested, I replied “I don’t care because I made the right decision to steal the screws vs. people having to witness a 50 year old temper tantrum!”  He said “well, you have a point”.  I went on to tell him if I did get arrested I hoped it was on the front page of the local paper so I could tout the plight of the perimenopausal woman!  Don’t screw with me (no pun intended ;)) or waste my time (what there is left) with your illogical policies & procedures and rude behavior aka bullshit!

In HBO’s show “Divorce” the main female characters are all in their late 40’s early 50’s, (except of course the ex-husbands new young wife 🙄).  One of the characters is a therapist and in one of her sessions with a 20/30ish female patient, who is just rambling on and on … she abruptly interrupts her and says “… you need to find someone else, someone who has more patience for your redundant bullshit.”

“The Wisdom of Menopause” by Christiane Northrup

“This was one of those amazing volcanic eruptions that occur from time to time when the lid finally blows on the container overstuffed with things we know but can’t talk about because we are female and have been taught that in order to survive, we must keep quiet so that authorities (mostly men) will like us. Everything we’ve tried to ignore and struggled to keep beneath the surface bursts forth in all its unedited glory  … usually this is attributed to the crazy-making effects of the hormonal shifts occurring in a woman’s body at this time of transition. What is rarely acknowledged or understood is that as these hormone-driven changes affect the brain, they give a woman a sharper eye for inequity and injustice, and a voice that insists on speaking up about them.  In other words, they uncover hidden wisdom—and the courage to voice it.  As the vision-obscuring veil created by the hormones of reproduction begins to lift, a woman’s youthful fire and spirit are often rekindled,”  this has been me more times than I can count in the last few years and would have been me if I hadn’t chosen to steal the screws!

“As a woman in midlife today, I am part of a growing population that is an unprecedented 48.5 million strong in the United States alone. This group is no longer invisible and silent, but a force to be reckoned with—educated, vocal, sophisticated in our knowledge of medical science, and determined to take control of our own health … Menopause (like menstruation, for that matter) was not discussed in public. Today this is no longer true. As we break this silence we are also breaking cultural barriers, so that we can enter this new life phase with eyes wide open—in the company of more than 48 million kinswomen, all undergoing the same transformation at the same time, the same sort of circuitry update at the same time. By virtue of our sheer numbers, as well as our social and economic influence, we are powerful—and potentially dangerous to any institution built upon the status quo.”

“It’s no accident that the current movement of psychospiritual healing is composed largely of women in their thirties, forties, fifties, and sixties. We are awakening en masse and beginning to deliver a much-needed message of health, hope, and healing to the world.” 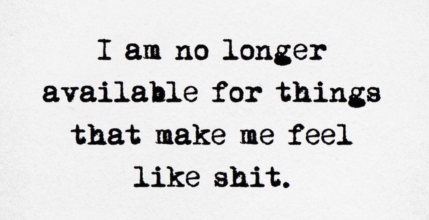 “This is 51! 😊 It sums it up so perfectly!! I had some friends who must have meant well but didn’t want to do what I wanted to for my birthday so I said ‘nope’ and had a lovely solo day!! It is so freeing not to deal with all the BS!!!!” 🥰

“Yes!!! It is the gift with purchase of our 50’s. We may have more wrinkles but we are way happier not dealing with the bullshit!!!” 💕

One thought on “No more time or room for bullshit …”